A Business Lesson from Jack Nicholson 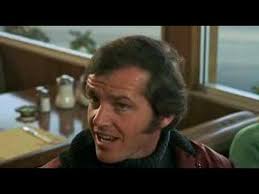 You may remember the scene from the movie Five Easy Pieces.  It’s the one where Jack Nicholson is at a diner and desires to have plain toast.  The problem is that plain toast is not on the menu.  The dialogue is hilarious, but carries an important message for our times.

Nicholson: “I’d like an omelet, plain, and a chicken salad sandwich on wheat toast, no mayonnaise, no butter, no lettuce. And a cup of coffee.”

Waitress: “A #2, chicken salad sand. Hold the butter, the lettuce, the mayonnaise, and a cup of coffee. Anything else?”

Nicholson: “Yeah, now all you have to do is hold the chicken, bring me the toast, give me a check for the chicken salad sandwich, and you haven’t broken any rules.”

Waitress: “You want me to hold the chicken, huh?”

I had my own “Jack Nicholson moment” this evening.  First, a bit of background.

I’m a bit of a minimalist and an avid recycler.  I’m very much aware that, as I’ve aged, my appetite has diminished and I try to avoid big meals.  I often finish only ½ my meal.  And with traveling as I do, what does one do with a doggie bag?

I’m also aware that 3 times as many people die in today’s world from obesity as from starvation.  Having grown up with scarcity, I abhor the waste of food.  What does anyone need with a 32oz Slurpee, a 22oz ribeye, or a salad that would feed a family of four?  We are swimming in excess garbage, the cost of which would put a huge dent in our deficit.  We are a hugely wasteful society.

So, what’s the rest of the story?

I’m writing this from Seattle.  While only 7pm local time, it’s 10pm at home.  I wander out for a bite to eat and end up at Danny’s Diner, a long-standing establishment just down the street from my hotel.  As it’s late for me, I don’t want a big meal.  But the beef stroganoff special sounds good to me.

Cleinman: “I’d like the beef stroganoff special but I have a very special request.  I will pay the full price, but I only want the chef to provide me with a ½ order.”

Waitress: “I spoke to the chef, we can provide you with a box so that you can take the extra food home.”

10 minutes later my meal arrives, this time with two waitresses in attendance.  The second waitress says: “We told the chef but he sent out the full meal anyway.”

By this time, I was a bit miffed.  As a customer, I want what I want.  But I asked for nothing that was all that special.  Indeed, from a business perspective, my request would have increased the meal’s profit contribution by about 50% through lower food cost and the elimination of the packaging for my leftovers.  WHAT’S THE BIG DEAL?

Now, I’m a reasonable guy.  The waitresses were simply the messengers, but even from their millennial perspective (save the world, etc.) they didn’t get it.  Why did my very, very simple request go unfulfilled?

We’ve all had similar experiences, especially in restaurants.  As a former restaurant owner, I’m sensitized to poor service.  I know that over 70% of all restaurant orders are “off menu” in some way.  A request such as mine should be no big deal.  But it was.

Why am I sharing this?   Because our industry’ social media sites are chocked full of concern for the future.  Students are asking if they made a mistake in choosing optometry as a profession.  Practicing ODs are seeking to exit.  Many fear the likes of Warby Parker, Opternative and other new forms of competition.  There’s real concern about competing in the future!

Jack Nicholson had it right.

Don’t make the customer work to get what they want.  Just give it to them.  And charge what you’re worth!